Thanks to DJI FPV, there’s never been a better time to enter the world of FPV drone flight. This advanced, intelligent, and easy-to-use system alleviates almost every major pain point that pilots have had to deal with over the years, while still offering the exhilarating and immersive experience FPV pilots live for. In this article, we’ll discover why DJI FPV is so revolutionary and how it combines the best aspects of both traditional drones and FPV drones in one amazing and accessible package.

First, let’s understand what FPV actually is. First-person view (FPV) drone flight is easily the most exciting way to fly a drone. Pilots are treated to a breathtakingly immersive view from the drone’s perspective, which provides a genuine sense of flying during high speeds and dramatic maneuvers.

In the past, experienced drone pilots had to assemble their own FPV drones and all of the related equipment. FPV pilots also had to practice flying for countless hours to ensure safe, confident flight and amazing footage. But now, DJI FPV has bridged the gap, providing even absolute beginners with everything they need and a simplified platform that lets them fly and capture epic FPV footage right out of the box.

So how are FPV drones different from other drones? Generally speaking, FPV drones differ from traditional drones in four major ways. First, FPV drones offer a more immersive experience, mostly due to the goggles that pilots wear during flight. Second, FPV drones move differently, offering much higher speeds and limitless maneuvering options. Because of this, FPV drones have typically required a much higher level of skill to fly. Third, FPV drones often require DIY assembly and testing before flying, whereas traditional drones are almost always ready-to-fly right out of the box. Finally, FPV drones almost never have intelligent safety features or aftersales service, which means crashes are almost inevitable and hard to repair.

Let’s dive into each of these four points and find out why DJI FPV provides the optimum experience.

A major reason FPV drones are more immersive than traditional drones is that pilots wear goggles during flight. These provide a unique perspective that is simply not possible with normal drone flight, where pilots often navigate by looking at the small screen of their smartphones.

DJI FPV offers an immersive experience that’s truly hard to match. The DJI FPV Goggles V2 provide a super-wide 150° FOV for a breathtaking view. The new O3 transmission system ensures images in the goggles are high-definition and extremely low latency, making users feel as though they are actually up in the air. Finally, the new DJI Motion Controller, a separately-sold accessory, gives pilots the option of controlling flight with intuitive hand motions, making DJI FPV even more immersive and unlike any other drone on earth. 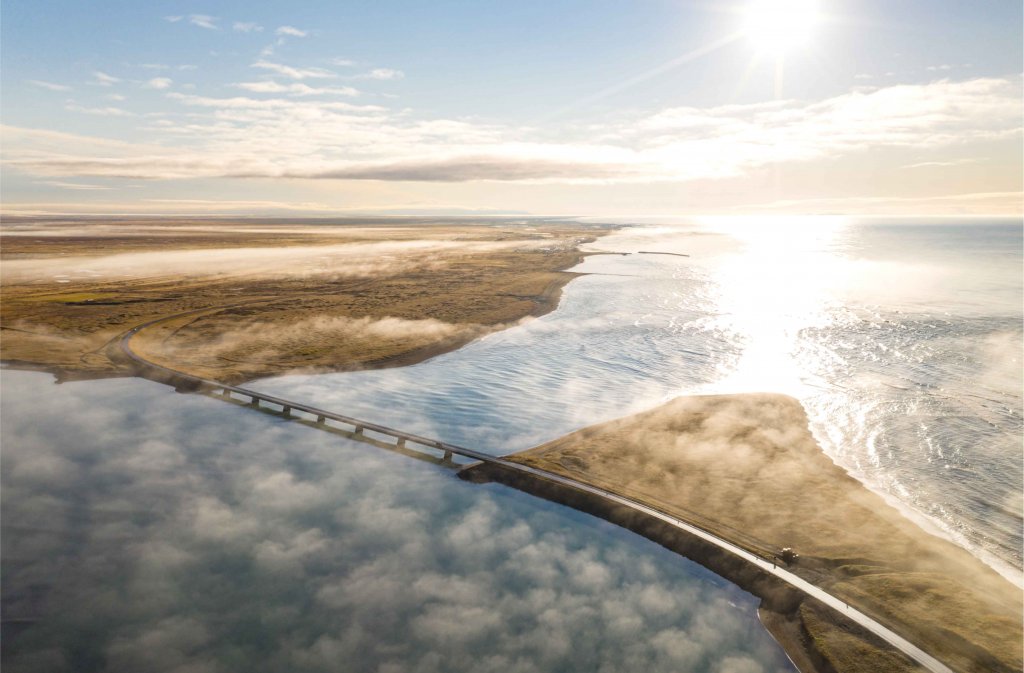 One of the biggest draws of FPV flight is the flight itself. Pilots can enjoy high speeds and limitless maneuvering as they zip through a forest, under bridges, or dive down cliff faces. These drones can reach speeds well in excess of 200 kph, with lightning-fast acceleration and precision handling. FPV drones also typically require a lot of practice before users are able to fly, whereas traditional drones are easy and intuitive enough to allow complete beginners to fly right away.

Traditional drones are easy to control and equipped with lots of smart functions such as automatic takeoff, QuickShots, obstacle sensing, and more. While these functions allow easier shooting, these drones are not very fast or agile as they are primarily built to produce smooth videos and high-quality aerial photos. 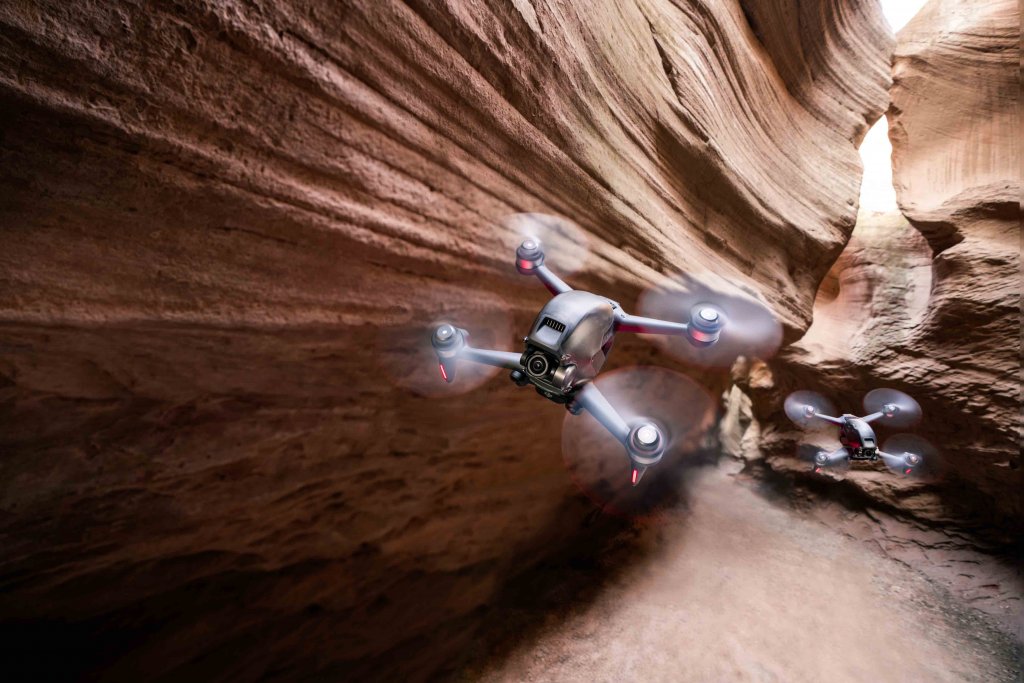 The maximum speed of the DJI FPV drone is 140 kph, and it can reach 100 kph in just two seconds. It also offers limitless maneuvering capabilities when flying in Manual mode. But DJI FPV also provides an array of control options that make it easy for anyone to use. The DJI FPV Combo comes with a standard drone remote controller, which offers a traditional control experience with N mode, full FPV flight with M mode, and the brand-new S mode. S mode provides a hybrid flight experience that mixes the movements of an FPV drone with the control stability of traditional drones. As we mentioned before, DJI has also developed a revolutionary control option with the DJI Motion Controller. This small, handheld device allows pilots to fly the drone using simple and intuitive hand movements. This new device along with three flight modes give users a powerful array of intuitive control possibilities. 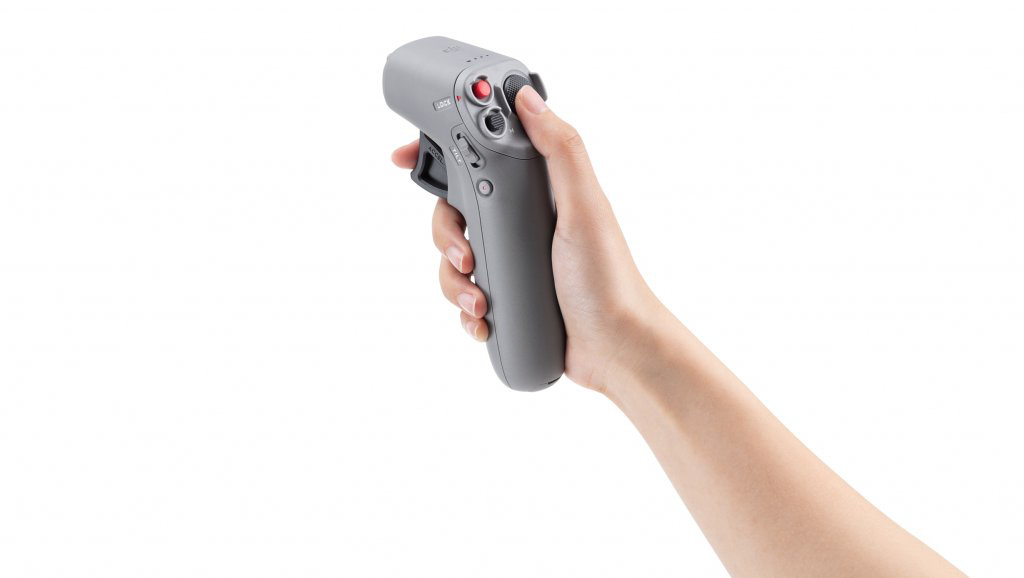 Traditionally, FPV pilots have had to assemble their own FPV drones and choose their image transmission system and goggles separately. The general structures of these DIY drones is simpler for higher speeds and more flexibility. However, there are major shortcomings, including a build that is often more fragile and less safe than traditional drones. Traditional drones are typically ready-to-fly and are equipped with more sensors to ensure flight safety and stability. However, there are fewer customization and part replacement options with these aircraft.

DJI FPV: Everything You Need in One Box

DJI FPV combines the flexibility of FPV with the ease-of-use of traditional drones. It is ready to fly right out of the box, with the drone, goggles, and remote controller already linked. All pilots need to do is charge the batteries and follow instructions in the DJI Fly app. DJI FPV also offers easy replacement options for some parts, such as the top shell, gimbal, and landing gear. 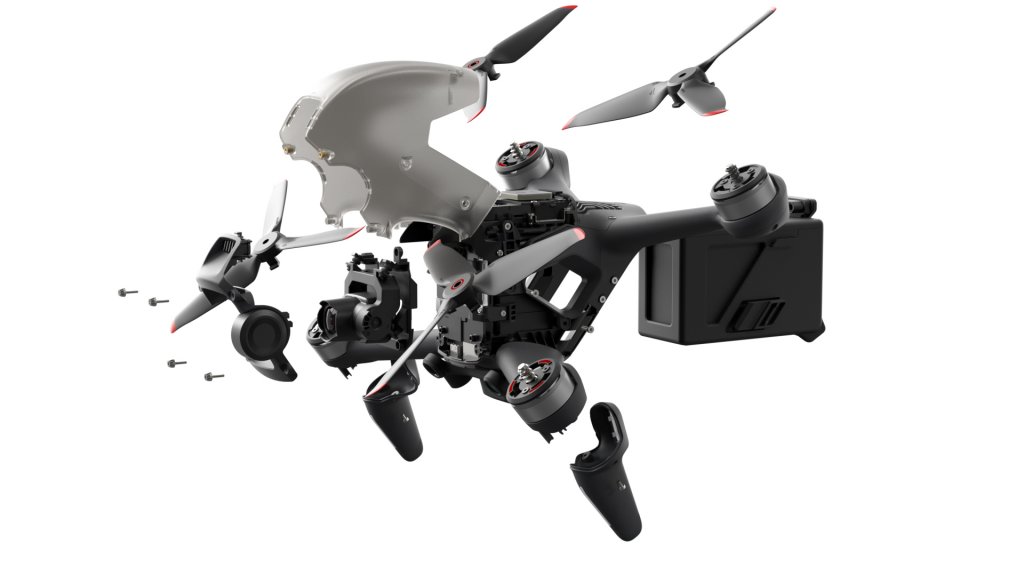 FPV drones have a steep learning curve when it comes to flight. The controls take dozens of hours of practice, making them much more prone to crashes when compared to traditional drones. They also don’t have features to help avoid crashes, which even the most basic traditional drones today offer, such as obstacle sensing, smart return to home, and more.

DJI FPV offers many of the advanced safety features that traditional drones have in addition to a new emergency brake and hover feature. With this, users can stop and hover in place with the touch of a button no matter which flight mode they’re in. DJI FPV can also fly back to its home point with the press of a button, and does so automatically in the event that transmission signal is lost.

Is Switching to FPV Hard?

In the past, transitioning to FPV drones has been hard for traditional drone pilots. Although FPV flight offers an immersive and exciting experience, FPV pilots usually need to assemble their own drone and practice flying virtually before taking off in the real world. That practice involves relearning the basics of flight control and often results in many crashes before pilots are anywhere close to risking their actual drones. Because of this, aspiring FPV pilots are often worried about flight safety, as well as the difficulty of assembling and controlling their drone. Even if they are enthusiastic about the immersive FPV flight experience, the inconvenience becomes an obstacle.

To help users overcome many of the biggest obstacles to FPV flight while keeping the experience incredibly exciting, DJI developed an FPV system that is easy to use and ready to fly right away. It offers the immersive flight experience pilots expect, as well as the ability to capture epic high-quality footage. DJI FPV has incorporated some of the biggest advantages of traditional drones and applied them to this FPV system. DJI even offers the DJI Virtual Flight app, which provides risk-free virtual flight training. These factors combine to lower the barrier for FPV beginners and provide an exhilarating flight experience that is more attainable for more people. Get ready to take your flights to a whole new level with DJI FPV. 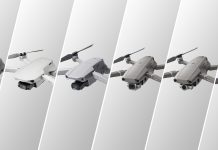 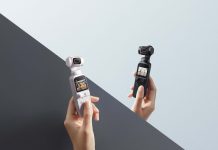