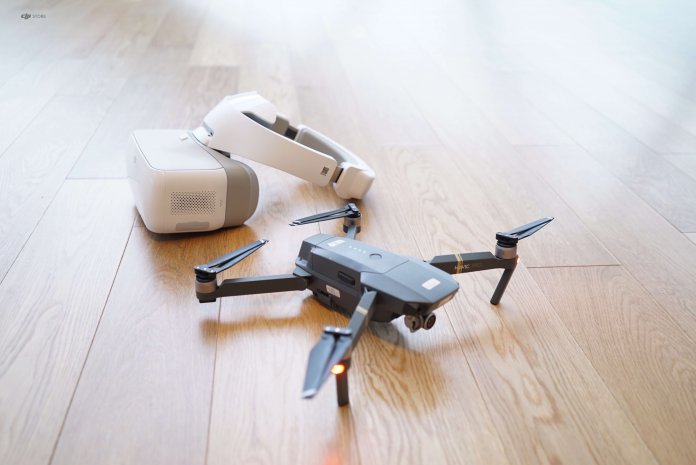 After a sneak preview in September at the Mavic Pro launch, DJI Goggles had their official release April 23rd at the NABShow 2017 trade exhibition. The specs and price were announced – and there was such excitement the initial run of Goggles sold out globally within something like three hours!

But a lucky group, including some high-profile reviewers, did get their hands on a set.

In his review video, videographer and drone expert Colin Smith of photoshopCAFE enthusiastically demonstrates the Goggles. As Colin says, DJI Goggles are “…almost like sitting in front of an IMAX.”

Although the DJI’s FPV Goggles are compatible with a range of DJI drones, they integrate most tightly with the DJI Mavic Pro. You simply download the free DJI GO 4 app to your smartphone, turn on the aircraft and remote control, then link the Goggles wirelessly. When wearing the Goggles, you can see a live view from the drone’s camera.

In his review, Smith runs through the main features of the Goggles and draws attention to the touchpad on the right side. While wearing the Goggles, you can easily navigate through the menus using the touchpad. The unit is comfortable to wear and Smith points out that people with glasses can use the Goggles with ease.

Rather than steal all of Colin’s thunder, you can check out his review here:

Smith’s contemporary, prolific YouTuber Faruk Korkmaz, begins his review with a singing and dancing sequence while wearing his DJI Goggles. Korkmaz, commonly known as iPhonedo, moves his head and body while wearing the Goggles and the DJI Mavic Pro camera moves in unison.

This demonstration indicates that the Goggles are in ‘Head Tracking Gimbal’ mode where only the gimbal will move, without affecting yaw. In ‘Head Tracking Flight’ mode, your head movements control both the aircraft yaw and camera tilt, just like when using the remote control sticks. All you need to do is turn left or right to yaw left or right, and straighten your head to stop turning.

The Goggles should be available again before too long. We’ll be sure to let you know when orders re-open!