In the latest installment from DJI Film School, award-winning filmmaker Brandon Li takes a deep dive into camera movement and how DJI RS 2 can help you achieve incredible shots that help tell your story.

In general, there are 2 main types of camera movement: motivated, and unmotivated.
First off – time for some definitions:

Motivated movement – when a camera moves based on something in the shot. i.e – tracking a person through the frame.

Unmotivated movement – if the camera moves on its own, rather than following a subject.

Motivated camera movement is great for maintaining focus on your main character. This can help to give significance to their actions, or reveal certain details that can help move the narrative along. With the stability of a gimbal you can move with the camera with your subject safe in the knowledge that your video will be smooth.

You can also have DJI RS 2 or DJI RSC 2 follow your subject through the scene automatically by using our upgraded ActiveTrack feature – simplifying the process of getting the perfect take.

Here is a behind the scene shot of a motivated movement, you can see how the camera moved to track the subject.

Great filmmakers will often combine both motivated and unmotivated camera movement in a sequence – or even a single shot – for a great effect.

You can see that in this example by Brandon Li where he dollies away from the subject at the café (unmotivated) only to begin tracking her movements once outside (motivated). 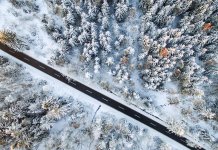 How to Fly a Drone: Beginner’s Guide