There are so many improvements in the new DJI Inspire 2, it took us more than 1900 words to scratch the surface. (And we’re still not done, of course – there’s lots more to come in the coming days.)

But we thought it might be useful to provide a “Top 10” list of the major features and specs of this new bird. We’ll also pop in a few of Chris So’s excellent photos along the way.

Yes, built-in. And with an optional Cinema DNG license, you can shoot 5.2k @ 30 fps (meaning you could actually crop in 4k without losing resolution)! It also supports Apple ProRes 422 in CineCore 2.0. The machine can also encode with H.265 – a super high-efficiency codec that allows you to crunch more high-resolution data into less space.

These are both *brand new* cameras, with very impressive specs. The X4s features a 1″, 20-megapixel sensor, and the X5S has a 20.8 megapixel Micro Four-Thirds Sensor, with an ISO range from 100 to 25600. (It should be pointed out that Apple ProRes and CinemaDNG are not available for the X4S – so if those are important to your workflow you’ll need the X5S.)

For the pilot, one of the most immediately noticeable differences from the Inspire Pro is the addition of a second camera that gives the equivalent of a cockpit view. For the pilot, especially when the craft is at a distance, this nose-mounted camera (seen half-way between the obstacle avoidance sensors directly below) quickly allows the pilot to determine orientation – which can get a little complicated depending on where the Inspire 2’s Zenmuse X4S or X5S is pointing. Both the FPV and the onboard camera signals (X4S or X5S) are transmitted simultaneously. 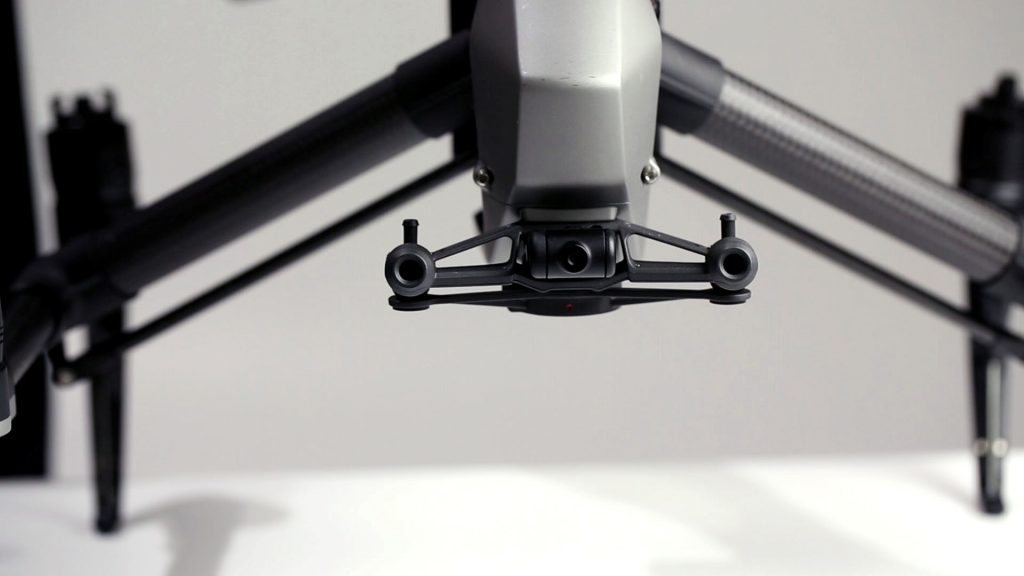 This is a huge advance. The forward-facing stereo vision sensors have a 30-meter range (about 98 feet), and help the DJI Inspire 2 avoid obstacles even when traveling at speeds up to 54 kph (34 mph). In addition, there’s an upward-facing infrared system that can scan up to four meters (13′) above the craft. (Think flying indoors, under bridges, etc.) The DJI Inspire 2 also features downward obstacle detection as well as accurate hovering in GPS-denied environments.

We’ll be all over these in the near future, explaining how they work, why they’re useful, etc. We particularly look forward to a detailed exploration of Spotlight Pro, which keeps the camera locked on the subject regardless of what direction the Inspire 2 is flying. There’s also Profile Mode for parallel tracking, and you can even set up and fly Waypoints with obstacle avoidance.

The Inspire 2 (like the P4P) allows you to select either the 2.4 or 5.8 GHz transmission frequency, which can help the Inspire 2 resist/avoid interference. (Sorry Japan and Russia – this feature won’t be available in those countries.) Maximum range is seven kilometres – which is far beyond what you can legally fly in most places in the world (which generally require the pilot to keep the UAV directly within his or her Visual Line of Sight). The Inspire 2 also has an improved broadcast mode, streaming smooth video at 1080i50 and 720p60.

This thing is fast – capable of speeds of up to 108 kph while descending at an angle (4m/sec) – and 94 kph in a straight line. But it also ascends and descends faster than its predecessor (we have a vertical ascent race video coming shortly). The Digital Circuit has had some experience with the integrated self-heating system in the batteries (which are, of course, also intelligent). We can confirm they work well, extending flight time in cold temperatures. You can fly the I2 in temperatures as low as -20°C (-4°F). In optimal conditions, flight time is up to 25 minutes while carrying the Zenmuse X5S.

You can enter travel mode (where the arms move in and raise the fuselage for mounting a camera), simply by pressing the power button five times in a row. No longer do you have to boot up your Inspire and your remote and wait. A new case (which we haven’t seen yet) holds everything – including a battery charger hub, gimbal and camera and is built for travel. The twin batteries are hot-swappable, so the DJI Inspire 2 doesn’t need to be rebooted when you change one battery, then the other. 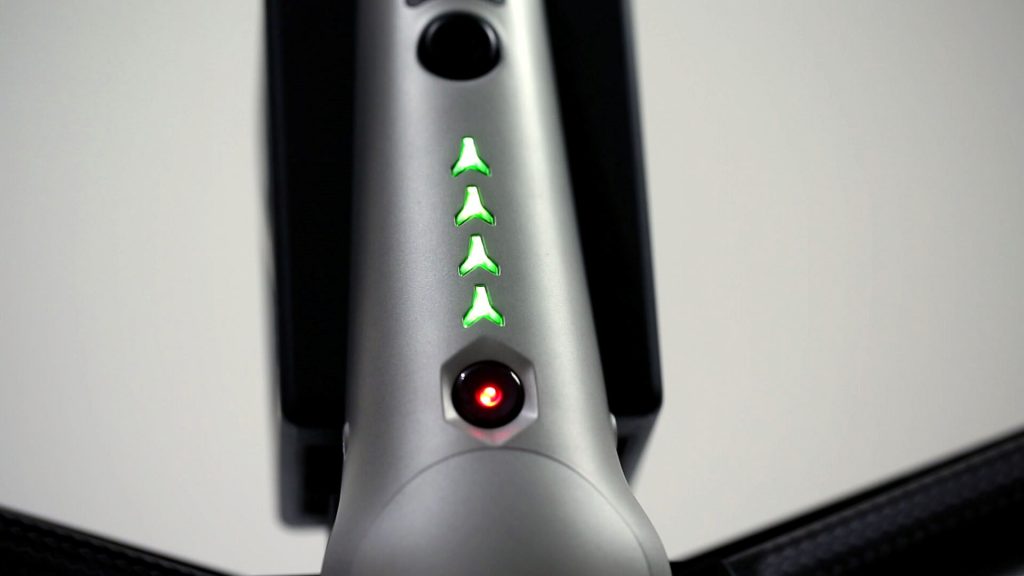 DJI takes some pride (and rightly so) in pointing out how it ensures that it doubles up on key electronic components – dual redundancy – which increases the odds of a safe flight in the unlikely but possible event one of those key components fails. This dual redundancy is extended to the Inertial Measurement Unit (IMU), barometer and Compass. Because the Inspire 2 also runs with two batteries, if something messes up with one, you should still be able to get it safely to the ground.

There’s a spot on the airframe for popping in an optional 4G LTE wireless network dongle. We have yet to see that dongle – but we’re very excited about the possibilities.

There appears to be a whole lot more coming soon in the accessories department. Options include new ultra high-clarity screens bright enough to shoot in broad daylight without requiring a sun-hood. Having seen a small one of these on the Phantom 4 Pro, we can attest to the how great the 5.5″, 1000-nits screen looks (the 7.85″ screen will be 2,000 nits).

This Article is first published in The Digital Circuit