On Tuesday, November 15, DJI showed the world its Inspire 2, a new version of the iconic Inspire drone with significant advances in technology and cinematography.

Priced at $3,499USD (naked version), this isn’t a drone for the casual pilot. When bundled with the new Zenmuse X5S camera, CinemaDNG, and Apple ProRes License Key, the price rises to $6,998 USD.

For a professional aerial cinematographer or photographer looking to produce top-quality aerial videos, this machine and the camera(s) make the price worth it.

Shortly before launch, we received a pre-production Inspire 2. Our team had one afternoon with it in a studio, and one morning in the field (where the temperature was below 0° Celsius (32° F)). We called on team member Antonio de la Cruz – known by some as “The Drone Whisperer” – to examine and fly this new machine, equipped with the Zenmuse X5S. An accomplished pilot, de la Cruz has flown his own Inspire Pro extensively for both recreational and professional purposes. He is also the co-owner of a retail store, Drones Plus, and has years of experience.

“When I first saw it, I thought: ‘Wow – this is real,’” he says. “Immediately I saw the contrast, I saw how beefy it was. The motors were a lot taller, and there was less clutter on the camera mount: It’s a three-point system instead of the four-point that took up at lot of space underneath.”

He takes a moment, then sums up his initial impression, “I was very impressed.”

Visually, the machine grabs attention. The white Storm-Trooper-like exoskeleton shell has been replaced by a matte grey cover that conveys a more serious tone. And indeed, there’s a lot more under the hood. 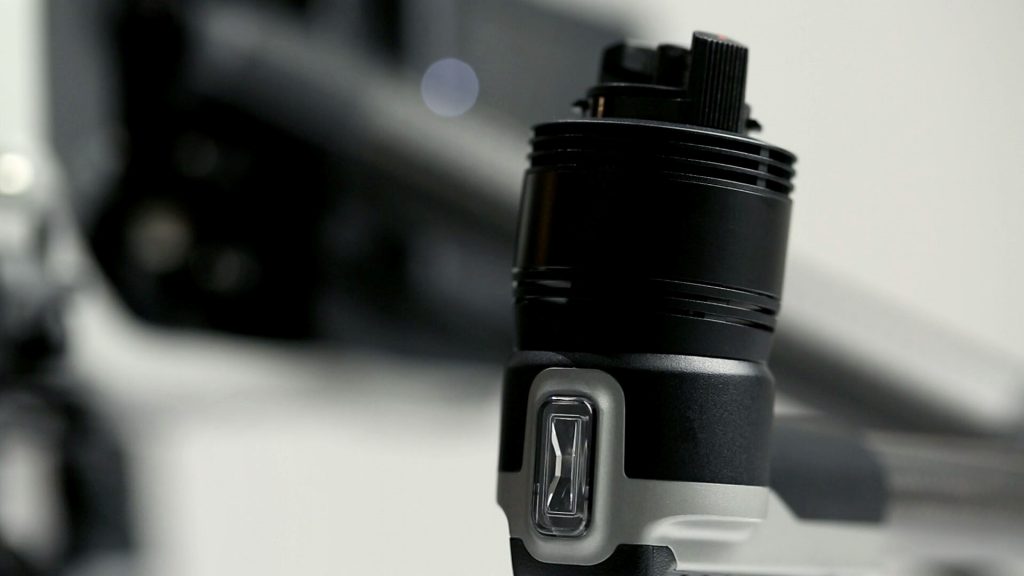 There’s a reason those motors look beefier. The propulsion system has been extensively redesigned. And the result of that is not simply more power – but more creative possibilities. The Inspire 2 can do vertical camera moves at speeds that outstrip its predecessor, climbing at almost 20 feet/second and descending even faster (30’/second). Think, for a moment, of the cinematic possibilities.

As mentioned, both of the cameras built for the inspire are new. The X5S supports Apple ProRes*2 and CinemaDNG*1 – but that doesn’t mean the X4S is a pushover. Both cameras have solid specs.

The Zenumuse X5S, by contrast, comes with a Micro Four Thirds sensor. That format allows for interchangeable lenses, an option most higher-end aerial cinematographers would prefer. The pixel count is slightly higher, at 20.8 megapixels, with an aperture range of F1.7-16 and a dynamic range of 12.8 stops. Low-light performance should be significantly better, with an ISO range of 100-25,600.

With cameras like that, this machine is clearly targeted at a more serious pilot. DJI’s news release calls the Inspire 2 “the best ready-to-fly platform of high-end film and video creators.”

DJI actually produced a short movie for the launch called The Circle – shot entirely with the Inspire 2/X5S combo. There are even shots where the Inspire 2 was flown from the air and into the grip of a handler who walked the machine to a close-up, ground-level shot. The three-axis gimbal made the transition virtually seamless.

“It’s gonna be the guys who do commercials,” says de la Cruz. “I really see the film industry using this… Web video, commercials – anyone who’s using the aerial camera for media will use this.”

And, quite likely, television stations and even television networks. The Inspire 2 has an enhanced version of Lightbridge video transmission. The video is smoother, and it’s capable of directly feeding a live television broadcast at both the 1080i50 and 720p60 broadcast standards.

While doing so, it’s not likely to run into anything. The machine is bristling with sensors on the lookout for obstacles in front, above, or below. The forward stereo vision sensors have a 30-meter range, which translates into protected flight at up to 34 mph/54 kph. What’s really new is the Inspire 2’s upward facing Infrared Sensing System – which offers protection from flying into an obstacle overhead.

“Having that obstacle avoidance on the top would give me a greater level of confidence flying it indoors to a higher level,” says de la Cruz. “Or in a situation where you’re flying under bridges.”

Like its predecessor, the new Inspire can hover accurately indoors, even in GPS-denied environments thanks to its downward-facing stereo optical and sonar sensors. There’s also an extraordinary level of redundancy, with a dual redundancy of the barometer, IMU, and Compass.

There are also dual “Intelligent Flight” batteries – with a feature that came in very handy during testing on a frosty morning in Canada. When powered up, these units have an integrated self-heating system. That means you can fly in temperatures as low as -4°F (-20°C). Flying in colder temperatures has long been a limitation with drones, significantly reducing flight time.

When we took out the Inspire 2 for testing, we brought along a thermal sensing gun. Despite the temperature (it was about -2°C when we started), the Inspire 2 returned home with batteries averaging a toasty 24°C.

With his Inspire 1 Pro, de la Cruz says freezing weather usually meant flight times of 10 or 11 minutes rather than his usual 20-minute flights. Those days will be gone – and having two batteries means even in the unlikely event of one battery failing a pilot would still be able to bring the Inspire 2 down safely to the ground.

“I really like the increased reliability – the double redundancy really does give me more confidence in the machine,” says de la Cruz.

Speaking of flight times, the dual battery system gives the Inspire 2, with the new Zenmuse X5S, a flight time of about 25 minutes. And, if you choose, you can fly very fast. Get the Inspire 2 humming in a straight line and you’ll hit up to 108 km/hr (67 mph). When we accelerated during tests, it seemed to be just a moment before the Inspire 2 had become a distant speck at the limits of Visual Line of Sight.

But there – the Inspire 2 has another new feature that comes in handy. When flying at a distance (but still within the Visual Line of Sight), even experienced pilots like de la Cruz can momentarily have to give their head a shake, or consult their DJI GO app, to confirm orientation. The new Inspire 2 features a nose-mounted FPV camera – which de la Cruz found instantly useful.

“I love that thing,” he says. “DJI was really paying special attention, [because] people were modifying the original Inspires, putting FPV on the noses of the Inspire 1s. While testing, when it came time to bring the Inspire 2 back, having that FPV was very useful.”

Another feature that will prove popular with Inspire veterans is the new way of entering travel mode – moving the arms up or down for traveling or installing the camera and preparing for flight. Instead of having to power up the machine and the DJI GO app, you can simply tap the power button five times. Do that and the worm screw engages and the Inspire 2 transforms itself.

Speaking of transformation, the Inspire 2 (like the Phantom 4 Pro and Pro+) allows the pilot to choose between the 2.4 and 5.8 Ghz wireless transmission frequencies. This is a huge bonus in areas where the 2.4 Ghz range is really crowded or subject to interference (though the 5.8 option will not be available in Japan or Russia).

Regardless of where you are, the Inspire 2’s range is seven kilometres – and it can stream HD video from that entire distance (which is pretty unreal). Professional accessories for the Inspire 2 will include two DJI-designed displays. One of them is 5.5″ with 1000 nits brightness – giving ample clarity to view or adjust controls even in broad daylight. There’s also a larger, 7.85″ version that’s even brighter, at 2000 nits. We have not seen these units, but we assume the 5.5″ display will be the same as the one that will ship with the Phantom 4 Pro+ (which was quite impressive).

Long flights and long shoots capture a lot of data. Here again, we see something new. Take a good look at the picture below:

Antonio is sliding out a high-speed, 128GB solid-state drive. It’s optional, as is the USB 3.0 reader required. But for anyone looking for a serious workflow, this will be the solution. (You can store stills, including up to 20 FPS bursts, on an SD card.)

It’s no surprise that DJI has also given the Inspire 2 more brains, with multiple Intelligent Flight Modes. DJI’s news release says these various new modes and computer vision technology allows creators to safely fly in imaginative new ways. One of them is Spotlight Pro mode – accessible straight from the DJI GO app. It essentially locks onto a subject during flight while the aircraft flies freely in any direction. Even if the gimbal reaches its rotational limit, the aircraft will smoothly rotate to maintain the shot. We tested this mode – and de la Cruz was more than impressed.

“You can start flying or maneuvering the airframe any way you want, and it will still keep you (or the subject) in the spotlight,” he says. “I can move, like freestyle flying, and have the camera stay on my subject.”

Other Intelligent Flight modes include Point of Interest, Waypoint with obstacle avoidance, and TapFly – where you can simply tap a point on the screen and the Inspire 2 will head to that point, all while avoiding obstacles. Profile mode allows for parallel tracking of a subject – even a fast-moving one like a car.

Speaking of which, ActiveTrack can actually recognize and differentiate between common subjects like people, vehicles, and animals. Depending on the mode (and your mood), the Inspire 2 can be dispatched to lead in front, follow behind, orbit or track alongside – all while maintaining a forward-facing position, ensuring that the obstacle avoidance is always working.

As mentioned – we have not had a lot of time with this machine. There may be obstacles of a different nature we have not yet detected.