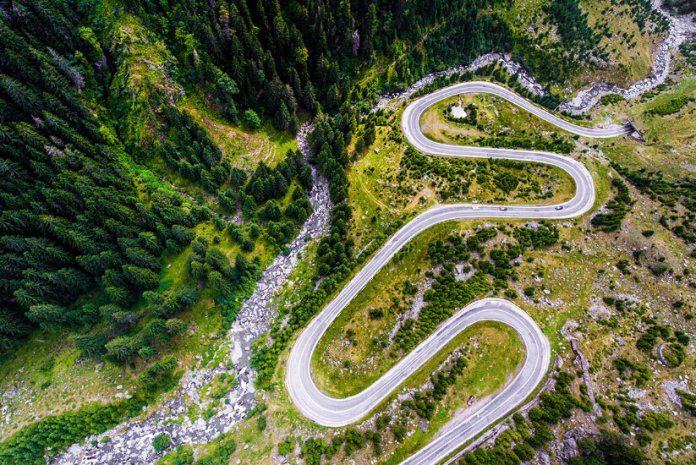 My name’s Calin Stan, and I’m a professional photographer, drone pilot, and the founder of TheDrone.ro. I’ve owned a Phantom 4 for over a year now, and I also own a Mavic.

Recently, I won the second prize in the Dronestagram and National Geographic Aerial Photography Contest with one of the first pictures I took with my Phantom 4. While traveling with a client to Brasov from Bucharest, the winding roads of the DN1A inspired me to capture one section from the air with my Phantom 4. Much to my surprise, the picture went viral on social media.

That’s how my Infinite Road to Transylvania Project started. Realizing that Transylvanian roads were a fascinating subject, I decided to capture more of them with a themed project. Everybody knows Transylvania and the story of Dracula, so I had name recognition on my side. My idea was to show what a modern-day Dracula would see flying over the Transylvania, with highways and cars replacing the dirt roads carriages of the past.

For this project, I used my DJI Phantom 4 and the DJI Mavic Pro, for some winter shots. The biggest challenge with shooting roads like these is that you can’t always park where you want. Sometimes I couldn’t park nearby the locations I wanted to shoot, so I’d need to fly relatively far away. Fortunately, the Phantom 4’s signal reliability and safety features like Return to Home helped me get the shots I needed. And both Phantom 4 and Mavic perform quite well even in sub-zero temperatures.

I’ve been a professional photographer for over ten years, but my aerial photography equipment is fairly basic: just the Phantom 4, Mavic, and some accessories like ND filters, a phone shade, and an anemometer (wind speed meter). It’s enough to get my camera in the air and find the perfect shot. DJI drones are stable and reliable, so I can focus on my shot without worrying.

While flying, I’m always searching for the best composition, light, time of day, and geometric forms. This project is all about geometry. Also, the time of day at which you shoot is paramount. If the sun is too low on the horizon, you will end up with long shadows from the trees and barely visible roads. The best time of the day to shoot streets is in the middle of the day when the sun was directly above me, or on cloudy days when there was no shade at all. Ironically, your aerial photography can improve if you ignore the rules of conventional ground photography.

For more DJI drone tips, check out my article – How to NOT Crash Your Drone in 15 Easy Steps.

Fly safe! And be creative! The Sky is NOT the limit!